Created 10-Jun-12
9 photos
Contrails ( /ˈkɒntreɪlz/; short for "condensation trails") or vapour trails are long thin artificial clouds that sometimes form behind aircraft. Their formation is most often triggered by the water vapour in the exhaust of aircraft engines, but can also be triggered by the changes in air pressure in wingtip vortices or in the air over the entire wing surface. Like all clouds, contrails are made of water, in the form of a suspension of billions of liquid droplets or ice crystals.

Contrail shadows sometimes appear counter-intuitive. The aircraft and its trail are high up and seen through a lower level thin layer of cirrus haze. The Moon has cast a shadow of the contrail downwards onto the haze layer. And quite independently of aircraft and shadows, ice crystals in the haze layer have created the 22º halo.

Depending on the temperature and humidity at the altitude the contrail forms, they may be visible for only a few seconds or minutes, or may persist for hours and spread to be several miles wide. Persistent contrails are thought to have a significant effect on global climate. 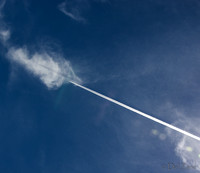