Created 31-Dec-19
19 photos
The Idaho State Capitol in Boise is the home of the government of the State of Idaho. Although Lewiston, Idaho, briefly served as Idaho's Capital from the formation of Idaho Territory in 1863, the territorial Legislature moved the Capital to Boise on December 24, 1864.

Construction of the first portion of the capitol building began in the summer of 1905, 15 years after Idaho gained statehood. The architects were John E. Tourtellotte and Charles Hummel. Tourtellotte was a Connecticut native whose career began in Massachusetts and skyrocketed further when he moved to Boise. Hummel was a German immigrant who partnered with Tourtellotte in 1901. The final cost of the building was just over $2 million; it was completed in 1920. The architects used varied materials to construct the building and their design was inspired by Classical examples.

Tourtellotte and Hummel used four types of marble: red marble from Georgia, gray marble from Alaska, green marble from Vermont, and black marble from Italy. Architectural inspirations included St. Peter’s Basilica in Rome, St Paul's Cathedral in London and the U.S. Capitol in Washington, D.C. The most prominent feature of the Capitol is its dome. Surmounting this dome is a bronze eagle, 5 feet 7 inches (1.70 m) tall. The Capitol building is 208 feet (63 m) high, occupies an area of 201,720 square feet (18,740 m2), and contains over 50,000 square feet (4,600 m2) of artistically carved marble.

There are 219 pillars in the original building – Doric, Corinthian, or Ionic – and each pillar is made up of marble dust, plaster and scagliola. Scagliola is a mixture of granite, marble dust, gypsum and glue dyed to look like marble. This artificial marble was created by a family of artisans in Italy.

On the first floor of the Capitol building, when looking upward to the dome, 13 large stars and 43 smaller stars can be seen. The 13 large stars represent the thirteen original colonies and the 43 smaller stars indicate that Idaho was the forty-third state to enter the union. The floor contains a compass rose. In its center is a sundial that has minerals found in Idaho. The first floor also houses a statue called The Patriot by Kenneth Lonn, for those who worked in the mining industry.

The second floor may be accessed via three entrances; from the east, the south and the west. The Lieutenant Governor’s office is located in the west wing, just opposite the Governor’s office. On the north side of the second floor rotunda is a sculpture of George Washington astride a horse. And to the rear of the George Washington statue is the Attorney General’s suite of offices. The space was home of the Idaho Supreme Court until it moved to the new Supreme Court Building in 1970. The east wing houses the office of the Secretary of State offices in whose reception area is the official copy of the Great Seal of the State of Idaho.

The third floor contains the Senate in the west wing and the House of Representatives in the east wing. The two chambers were remodeled in 1968. The old Idaho Supreme Court room was located here, now used for hearings and committee meetings of the Joint Finance and Appropriations Committee.

On the fourth floor are balcony entrances to the Senate and House galleries. The galleries enable members of the public to watch the Legislature while it is in session. The northeast, northwest and southwest corners of this floor contain many historic paintings and murals. 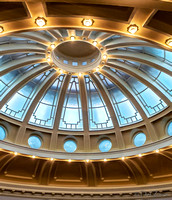