Created 5-Jul-12
81 photos
Fireworks are a class of explosive pyrotechnic devices used for aesthetic and entertainment purposes. The most common use of a firework is as part of a fireworks display. A fireworks event (also called a fireworks show or pyrotechnics) is a display of the effects produced by firework devices. Fireworks competitions are also regularly held at a number of places. Fireworks (devices) take many forms to produce the four primary effects: noise, light, smoke, and floating materials (confetti for example). They may be designed to burn with flames and sparks of many colors, typically red, orange, yellow, green, blue, purple, and silver. Displays are common throughout the world and are the focal point of many cultural and religious celebrations.

The earliest documentation of fireworks dates back to 7th century China, where they were invented. The fireworks were used to accompany many festivities. It is a part of the culture of China and had its origin there, eventually it spread to other cultures and societies. Important events and festivities such as the Spring Festival (Chinese New Year) and the Mid-Autumn Festival were and still are times when fireworks are guaranteed sights. China is the largest manufacturer and exporter of fireworks in the world.

Fireworks are generally classified as to where they perform, either as a ground or aerial firework. In the latter case they may provide their own propulsion (skyrocket) or be shot into the air by a mortar (aerial shell). The most common feature of fireworks is a paper or pasteboard tube or casing filled with the combustible material, often pyrotechnic stars. A number of these tubes or cases are often combined so as to make, when kindled, a great variety of sparkling shapes, often variously colored.

The skyrocket is a common form of firework, although the first skyrockets were used in war. Such rocket technology has also been used for the delivery of mail by rocket and is used as propulsion for most model rockets. The aerial shell is the backbone of today's commercial aerial display. A smaller version for consumer use is known as the festival ball in the United States. Ground fireworks, although less popular than aerial ones, create a stunning exhibition. These types of fireworks can produce various shapes, such as simple rotating circles, stars and 3D globes. 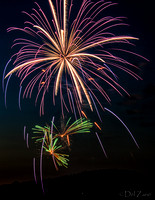