Created 26-Oct-19
34 photos
Mdina is a fortified city, located in the Northern Region of Malta, which served as the island's capital from antiquity to the medieval period. The city is still confined within its walls and has a population of fewer than 300. Mdina was once the original capital city of Malta and is much older than Valletta, dating back approximately 4000 years.

The city was founded as Maleth, around the 8th century BC, by Phoenician settlers and was later renamed Melite by the Romans. Ancient Melite was larger than present-day Mdina, but was reduced to its present size during the Byzantine and Arab occupations of Malta. Later, the Knights of Malta governed the city and built a grandiose Baroque gate in 1724, through which visitors now enter to find themselves inside Mdina’s medieval walls – transported back in time.

Mdina remains the center of Maltese nobility and religious authorities. Property continues to be passed down generation to generation. Regardless of generational family tenure, Mdina has never regained its pre-1530 prominence.

Nicknamed the "Silent City", no automobiles, except those belonging to a limited number of residents, have permission to enter the city. Accordingly, Mdina provides a soothing, safe, quiet and relaxing atmosphere for visitors to walk its narrow streets and alleyways…sans an occasional “Karozzin”, a traditional horse drawn carriage dating back to the 19th century.

St Paul’s Square amasses the impressive large Baroque St Paul’s Cathedral (pix towards the end of this gallery/slideshow), designed by world famous architect, Lorenzo Gafa. An ancient tale suggests it similar to other Maltese cathedrals – the clock on the left shows the incorrect time to confuse the devil; however, the clock on the right is correct and chimes every 15 minutes.

Our sincerest thanks go out to our resident friend, Albert Azzopardi, for his generous time spent with us exploring this spectacular treasure. 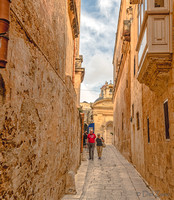 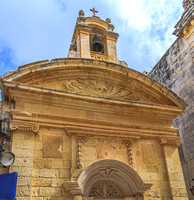