Created 9-Feb-13
37 photos
Haleakalā (pron.: /ˌhɑːliːˌɑːkəˈlɑː/; Hawaiian: [ˈhɐleˈjɐkəˈlaː]), or the East Maui Volcano, is a massive shield volcano that forms more than 75% of the Hawaiian Island of Maui. The western 25% of the island is formed by the West Maui Mountains.

Early Hawaiians applied the name Haleakalā ("house of the sun") to the general mountain. Haleakalā is also the name of a peak on the south western edge of Kaupō Gap. In Hawaiian folklore, the depression at the summit of Haleakalā was home to the grandmother of the demigod Māui. According to the legend, Māui's grandmother helped him capture the sun and force it to slow its journey across the sky in order to lengthen the day. 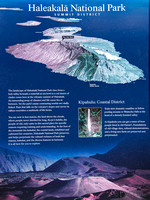