Created 14-Nov-19
22 photos
Corinth was a city-state (polis) on the Isthmus of Corinth, the narrow stretch of land that joins the Peloponnese to the mainland of Greece, roughly halfway between Athens and Sparta. The modern city of Corinth is located approximately 5 kilometers (3.1 mi) northeast of the ancient ruins. Since 1896, systematic archaeological investigations of the Corinth Excavations by the American School of Classical Studies at Athens have revealed large parts of the ancient city, and recent excavations conducted by the Greek Ministry of Culture have brought to light important new facets of antiquity.

For Christians, Corinth is well known from the two letters of Saint Paul in the New Testament, First and Second Corinthians. Corinth is also mentioned in the Acts of the Apostles as part of the Paul the Apostle's missionary travels. In addition, the second book of Pausanias' Description of Greece is devoted to Corinth.

Ancient Corinth was one of the largest and most important cities of Greece, with a population of 90,000 in 400 BC. The Romans demolished Corinth in 146 BC, built a new city in its place in 44 BC, and later made it the provincial capital of Greece.

The last three photos collectively zoom in on Corinth's acropolis, which was historically most Greek city's "safe-haven" from enemies. An 'acropolis' is any citadel or complex built on a high hill. The name derives from the Greek akro, high or extreme/extremity or edge, and polis, city, translated as 'high city', 'city on the edge' or 'city in the air', the most famous being the Acropolis of Athens, Greece, built in the 5th century BCE. 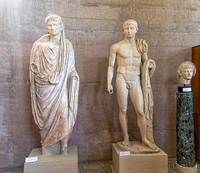 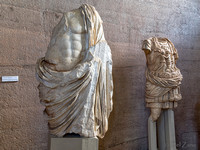 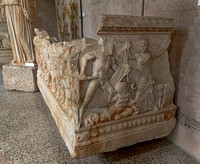